On Friday the 30 July, Churchlands Primary School participated in our second RoboCup Jr event. In the end, only our Year 6 teams represented the school and our 3 teams experienced a mix of excitement and nerves as the big day approached. All CPS Robotic students have been working hard since term 1 this year and it was great for the event to finally arrive.

On arriving at Curtin Arena, it was clear that this year’s event was even bigger than the 2020 version (due to COVID) with many more students and robots filled into the arena. Once registered the teams moved to their designated preparation zones where they were on their own for the day.

The boys team, consisting of Toby D, Owen, Ryan, Daniel, Matt and Xulin were required to program their robot to follow a series of black lines and avoid obstacles as it made its way to a rescue area where it was then required to locate and injured victim (aluminium can) and remove it from the danger zone. The robot worked flawlessly, navigating the course however moved a little slow to get to the end in the required time. During the day, the team were required to complete 4 different courses, with each course being more difficult than the last. All four performances were very consistent, with the boys picking up points each time. Although running beautifully and navigating the courses with only minimal trouble, unfortunately, the robot continued to not make it to the danger zone to perform the rescue and receive maximum points. While finishing gallantly mid-upper table, only ten teams were invited back for the final day of runs. Well done boys, you performed wonderfully as a team and were very unlucky to miss out on the final day! 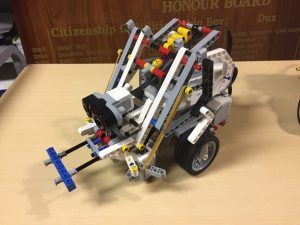 The Daffies, consisting of Lucy, Isabelle, Zhiqing and Sophie were up against the ‘big kids’, with their robot, Daffy having to navigate a walled maze and drop care packages to wounded victims (pink squares) located. This year there were many more teams in the open competition and the quality of performance was higher than last year. Among the many high school teams were the Sacred Heart College team who won the National Finals a couple of years ago. While practice sessions were extremely promising throughout the year, and on the day – when programming highly intricate mechanical beasts – anything can go wrong and unfortunately for the Daffies, on the day it did! The robot refused to cooperate on the first run, not leaving the starting block in the four minutes provided. Resilience and problem solving is a huge part of robotics, and the girls showed great grit to ‘get back on the horse’ and work out what was going wrong. Although not managing to pick up too many points, the team were amazing to get the robot back on track and work its way through the maze for the final runs. Well done girls. It was a hard day at the office but it was great to see you get involved and learn from it all. 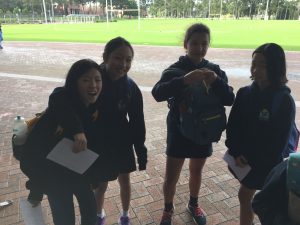 Finally, the CPS Melodies, represented by Prachi, Amber and Katana were the first-ever CPS team to perform in the On-stage event. Over the course of the year, the girls have been designing and choreographing a performance that includes themselves and their robot, in time to the music.  When their timeslot was up, the girls assumed their position and ready, in costume, were underway! It was a well-rehearsed performance, full of colour and movement with all four dances swinging around the stage in sync. Although it didn’t deter them, the girls too were forced to deal with some technical difficulties with their robot performer taking an early stage exit during the performance. Like true professionals, the show went on with the girls finishing the routine to rousing applause. The girls should be extremely proud of their efforts, as they have now trailblazer the on-stage event for future CPS students. Their effort was rewarded with an invitation back on Saturday, to re-perform their dance in the finals. It was a great opportunity to refine their routine which resulted in another brilliant performance – this time with their robot staying put. Well done girls. 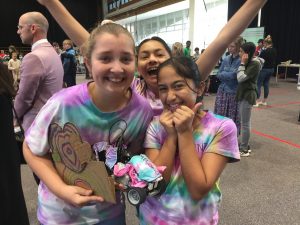 To all the contestants, congratulations on putting in hard work, putting yourself out of your comfort zones and developing many valuable skills along the way. Although not all went according to plan on the day – your skills and knowledge were clear to see across the course of the year. Thank you for putting in the time, you all should be very proud of what you achieved and good luck in your future robotic adventures!